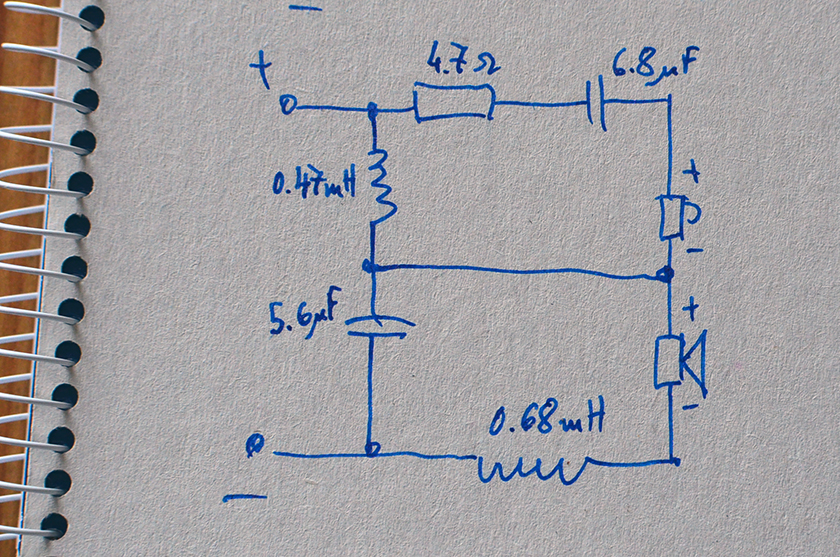 Two coils, two caps and resistor, arranged across two drivers, with the purpose to divide the energy between them evenly. This is what I came up with after several months of experimentation. I tried almost everything, but it was the series crossover network that brought resolution and peace to my weary soul.

We don’t often see series dividing networks in commercial or DIY applications. This breed is even more obscure than tube amplification and analog playback put together. But here we go – the sidewalks along the beaten track are sometimes more desirable.

Setting off like Alice in Wonderland, my initial excitement caused by bringing the crossovers out of the enclosures was continuously drying up, giving way to the sober realization that the possibilities to lift the performance of the original crossover network were rather limited. When I say this I mean I really tried variety of things, not just different parts, but tweaking values up and down, going different filter orders, attenuation slopes and what not, but at the end I reached the point to confirm that the original parallel network is simply spot on and I wouldn’t touch it except to use parts of higher quality.

Despite the confirmation that the original crossover, developed by Andy Whittle at Audio Note UK, is optimal, I was still unsatisfied with the performance and was scratching my head as to what to do next. Out of curiosity and desperation I eventually decided to give the series crossover a try. After some research I came up with what should have been a series approximation of the original parallel dividing network. During the research I noticed that there is a lot of controversy on the topic parallel versus series crossovers but I got the notion that due to their subtractive nature series crossovers are harder to design and model than their parallel counterparts. 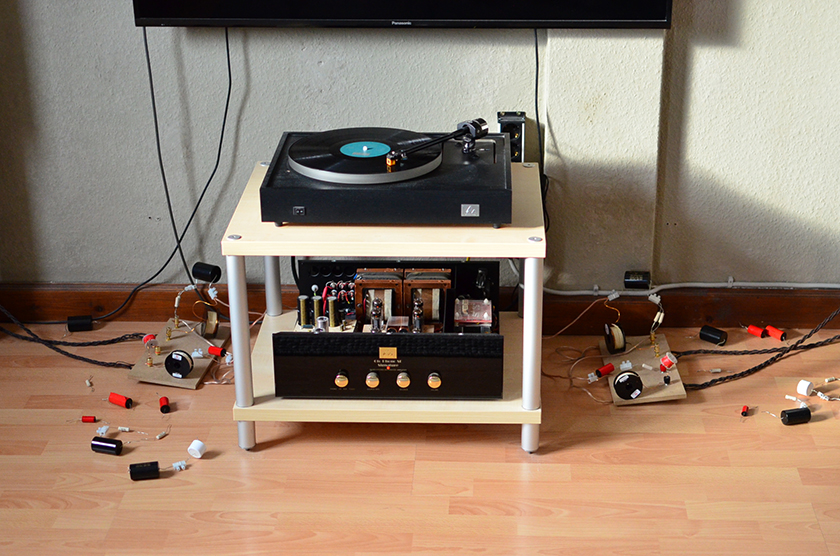 Even though it was far from optimal, the initial prototype gave quite some promise. I was stricken by the impression that I am listening to a single point source – twitter and woofer seemed to work like one unit. Suddenly things have become more focused, dense and saturated. It was new and completely overwhelming experience. And as it turned out this promising start was the beginning of a journey that took me several months to complete. I am glad I went through it, and I would like to share some tips on crossover development I learned along the way.

1. Never give up on series crossover network as an alternative to the parallel one before you even tried it.

2. Do not start with complex, high order arrangements, build with simple first order filters first and try to get the best out of the imposed limitations before continuing further with increased complexity.

3. Don’t bother spending time with impedance linearization networks or voltage dividers before you have fully explored the basic design. To my experience every element or group of elements connected directly across the driver’s terminals have mostly adverse effects.

4. Don’t take for granted the superiority of certain components based on price tag and number of likes. To my experience the common type wire-wound coils outperform both backed varnish and copper foil types that also cost more.

5. Pay attention to how the total DC resistance in the woofer’s signal path affects the fine balance between bass extension and midrange clarity. Since the DC resistance influences the total Q of the system and is mainly contributed by the coils in series with the woofer, one can fine tune a circuit by choosing coils wound with wire of specific diameter. For this project I choose a 0.47mH coil of 1.2mm wire by Monacor and another 0.68mH coil of 1.4mm wire by Mundorf, this combination gives a balanced blend of qualities I really enjoy.

6. Use resistors of good quality, they are usually not expensive compared to the other parts but contribute vastly. I find Ohmite wire-wound non-magnetic resistors superior to the common MOX types.

7. Use breadboard for rapid prototyping fitted with connecting terminals so that you can easily swap parts on a whim.

8. During the evaluation process use program material of wide variety. A good dividing network is able to draw attention to the performance itself, not to the sonic artefacts. Even lesser records become thoroughly enjoyable which is one of the most desirable features.

9. Start a project diary. As the project progresses, a stage will inevitably be reached where you might think “That’s it!”. Days or even weeks will pass before you decide to change anything. It is important, before you make any changes, to draw a schematic with component values and everything in order to have a snapshot of the current state. Add also a short description of the improvements you hear in comparison with the previous version. Keeping track of the milestones is important as it will serve you as a version control system that would allow you to revert back to an earlier iteration if something goes wrong. It would also give you an overview of the actual progress. 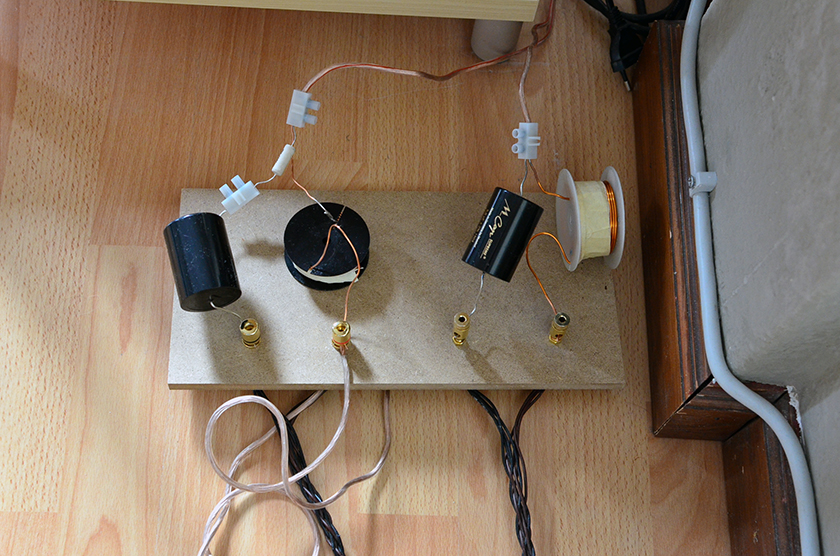 No measurements of any kind were executed during the development process, the network is tuned completely by ear. Relying entirely on my senses to assess the reproduction qualities allowed me to concentrate fully on the perception of the playback, but sometimes longer pauses were needed, visiting live performances, as well as referring back to the original crossovers for comparison. During the process there were few intermediary stages when I was already quite satisfied with the results and it was only the curiosity and the urge to experiment further that were pushing me forward.

The proposed second order series crossover network shares a common tonal balance with the original parallel one, used in Audio Note AX-Two stand-mounted loudspeakers. The parallel crossover impresses with exemplary transparency and layering to the point that it feels somehow immaterial and holographic. As consequence it could direct the listener’s attention toward sonic artefacts and provoke analytical reactions. The series network on the contrary delivers more focused, dense and saturated presentation that manages to convey the atmosphere of a real performance better.

Although I find the series crossover vastly superior, it could also be that it is a matter of individual preference. Designer’s preference along with the fact that series networks are harder to model and measure might give us some explanation on why this type of network has not received wider acceptance. As far as I know series filters are used by very few people in the industry. One is Tony Gee whose capacitor test page is quite popular among the audio hobbyists. The other is Misho Mironov known for his artisan products and patent on a series dividing network based on transformer whose primary winding performs low-pass filter function while the secondary serves as HF attenuator.

This piece might have been named “In praise of series dividing network” as well, because my intention was to tell you how good this breed of network sounds. I would be delighted if someone builds that network to try it with existing Audio Note AX-Two speakers or just use it as starting point for a coming project.

I did a full circle and eventually returned to the original parallel crossovers. These are simply unbeatable. They strike such a fine balance I simply could not match with the series version, so I gave up on it.

Finally the AX-Two crossover project was completed. As it was mentioned earlier the original parallel crossover network was chosen as a basis for this build.

The fact is that I was disappointed. I didn’t like their sound at all, quite congested, mechanical and heavy. My assumption was that the solid core copper wire was coloring the sound, so I rewired the entire circuit with exception of the ground bus with Duelund silver foil in silk wire. And voila – what a nice surprise, the sound has transformed completely. It has opened up nicely revealing plenty of detail without being analytical in any way. I use them for more then a month now and I can’t deny I am very satisfied.