This project came in as a logical end of a continuous process of refining the amplifier’s performance. The itch to check out how a stepped attenuator will perform against the ubiquitous volume potentiometer became increasingly acute after the surgery that transformed my Audio Note OTO Phono SE Signature integrated into a P1 SE Signature power amplifier. 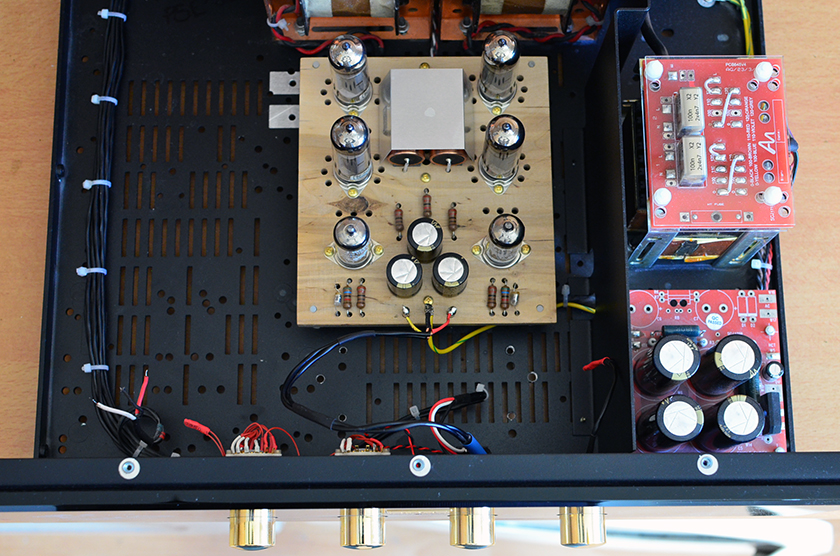 The surgery consisted in getting rid of the line stage, phono stage, the respective power supply, shunting the tape selector switch and the balance pot. The improvement I heard after dealing with the clutter was remarkable. The power amplifier section based on a pair of EL84 power pentodes in parallel single-ended configuration driven by one SRPP connected 12AX7 double triode per channel turned out to be very sensitive and responsive to the line-level signal sourced from CD player or TV. When directly driven from the volume pot it showed no deficiencies but the opposite – tone color, rhythm and pace, transparency, low-level nuance and detail in the low octaves improved tremendously and made me enjoy digital playback again.

I came to the realization that the only way to further improve the performance was not by adding another amplification stage, which would inevitably inject some distortion, but by concentrating on the attenuation quality in front. So, I decided to take the plunge into the deep waters of signal attenuation.

As an introduction I would say that a volume potentiometer is basically a potential divider that keeps the impedance seen by the source constant independently of the volume setting. There are two ways to simulate such attenuation behavior with a switch and resistors  – one is to connect as many resistors as attenuation steps in a chain (series), the other is to connect as many pairs of resistors as attenuation steps in parallel (ladder). The advantage of the series resistor network is that there is only one switch contact (at the junction between two adjacent resistors in the chain) but at the same time it has as many soldering joints as attenuation steps. The ladder type in opposite needs two switch contacts (at both ends of a resistor pair) but only one soldering point. A very good article with explanation and schematics could be seen here.

However, some smart men came up with a third way that combines the strengths of the aforementioned two methods, although it is not a precise equivalent of the potentiometer in the fact that its impedance seen by the source varies, the so called shunt type needs only one switch contact and one soldering joint. The shunt type attenuator is a potential divider whose first resistor has a constant value (most often 100kΩ) whereas the second, across which the voltage drop driving the amp develops, is switchable. I decided to go that way for its simplicity and the fact that Audio Note employs the same type in their higher level preamps.

I decided not to spare on the mechanical part and go with Blore Edwards 23 steps stereo attenuator switch – the same unit Audio Note used in their now obsolete 23-stepped attenuator. I went for generic metal-film 0.5 watt resistors with 1% tolerance that can be found in Reichelt (the German equivalent of Farnell, Mouser, etc) and based their values on the 100kΩ 34-step shunt type network table generously provided by Hificollective. Although my switch had only 23 positions I preferred to go with finer attenuation steps by skipping the first few and the last few resistors shown in the 34-step table, for I expected these to be in the extremes of the range I usually don’t use. At the end all 66 resistors I ordered cost me less than a single Audio Note tantalum resistor with the same power rating. Funny.

I didn’t expect much I have to say, I just wanted to check if the chosen resistor values work well and get a general feeling about it. I had no illusions I can build something as beautifully crafted as the Audio Note’s 36-step attenuator. This switch developed in-house is unique with no parallel in the audio industry to my knowledge. Generally all attenuator switches available use 2 mechanical contacts per wafer, you can see it on the image below – one contact is in constant touch with the wiper’s base, the other is made between the wiper and a pin. Audio Note’s 36-step switch is the only one to enter the territory of the single contact switch where a wire going through the shaft is soldered directly to the wiper’s base. True, the wire will twist with rotation, maximum half turn in each direction, but providing it has sufficient length this will stress neither the solder joint nor the multi-strand wire itself. Multi-strand wires are made to stand twist, we see them twisting in the tonearm bases, we see them everywhere. 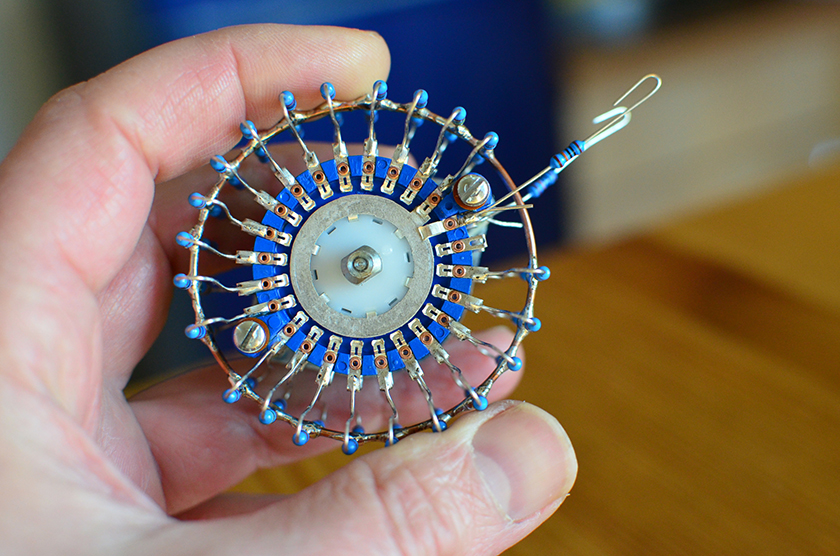 The assembly was pretty straightforward and it took me 3-4 hours to complete. All the resistor pairs came in bags with labels which made the sorting a breeze. The switch was easy to disassemble so that each wafer was conveniently worked on. First I soldered all the resistors to each wafer as a star, then I bent them and joined them together with a ring of thick solid copper wire. After the completion I checked with a multimeter all the positions in both channels for correct resistance values, it was all good. Installing the assembled attenuator in OTO was a breeze for there was plenty of space inside the enclosure. I used the balance pot opening in the chassis to mount it on.

With the first tones it became clear that some serious magic was going on. The vocals struck me first – three-dimensional and breathing, I could hear the atmosphere, there was transparency and some sweetness in the presentation that made me hold my breath and stay for few minutes as hypnotized. It was Loyko’s Road of the Gypsies live recording produced by WDR (Westdeutscher Rundfunk) as part of their World Network series. Seriously energetic music with vibrant colors and great violin solos. At the same time I had the feeling that the sound shimmers a bit, it was not as steady but conveying a sense of fragility and sweetness. The tonal balance shifted a bit on the brighter side but there was a nuance and detail in the lower octaves that made the potentiometer sound bloated and midrange oriented in comparison. The stepped attenuator brought also a noticeable expansion in the frequency extremes, especially noticeable in the top octaves, together with more stable and three-dimensional soundstage. 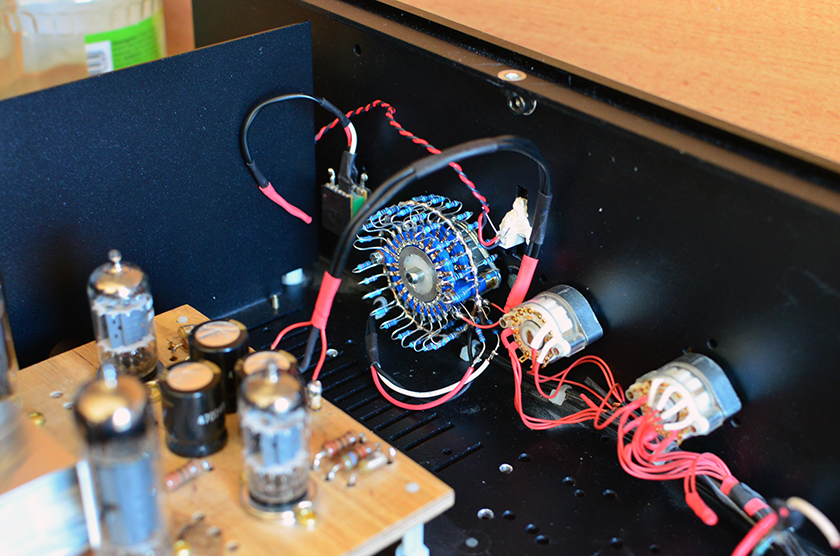 Along with the improvement in sound, the stepped attenuator outperformed the pot in terms of usability as well. It turns out that the 100kΩ 34-step resistor table applied to a 23-step attenuator works like a charm providing better log functionality than the pot. Before, I usually operated the volume knob between 9 and 9.30 o’clock to bring the softest and the loudest sounding records equal in level. This was rather narrow range that made precise volume adjustment difficult. Now the same range spans between 9.30 and 12 o’clock, I have better control and I have never felt the need to set the level between two steps. Sure, the pot has a nice smooth turning action while the switch jumps from step to step but that’s pretty much the only trade-off I can tell.

Further listening sessions confirmed that even though it was made with generic metal-film resistors the attenuator was a considerable improvement over the stock volume pot. I have to say that the performance of this system really started to amaze me. It is intoxicating and I feel like an addict waiting patiently to take his daily dose of being in the presence of some great performers. It really brings them to life this machine and I often have the feeling I am summoning ghosts here.