It all started with the love for music. We didn’t have proper audio back at these communist times in the 80s, which were dominated by cheap Russian transistor electronics. I was introduced to what should have been an advanced audio system in the home of my teacher where I was taking drawing lessons together with a bunch of other kids. The room in the old house was brightly lit and we were all staring at the still life arranged in front of us.

I was contemplating the contrast between the regular shapes of the pottery and the irregularities of the drapery behind and I remember how my strain to capture the intangible play of shapes and shadows has been relieved by the gentle flow of classical music our teacher was always keen to let on. These three hours long weekly sessions were my first introduction to the beautiful world of the classical music and my first initiation into the serious listening. The whole atmosphere with the odor of turpentine and timbres of acoustic instruments floating in the space left mark on my future musical taste development.

Later on when I leaved the drawing behind and showed interest in guitar I was confronted with another type of music – the jazz. The small room of my guitar teacher was resembling a shrine dedicated to the gods of music – the walls were covered with posters of musicians, several guitars in their cases were leaning around, records were pilling up to the ceiling and scores of notes were stacked on the shelves. And in all that mess two middle sized speakers together with a tape deck, tuner and amplifier where forming what should have been a decent HiFi audio system. He introduced me to musicians like Joe Pass, Herb Ellis, Pat Metheny, John McLaughlin, Al Di Meola and many more. Though I didn’t become anything more than an amateur performer, these early experiences influenced my musical preferences driving them primarily in the direction of classical, jazz and world music.

As usual in the course of life my tastes and attitudes were swinging between musical genres and styles but I was interested primarily in the musical content and its emotional impact. Few years ago I had only iPod Touch feeding my Beyerdynamics DT880 Pro, and streaming CD quality content from Quobuz was quite enough. But all this has changed when a friend of mine – vinyl junkie and flea market early bird – decided that I need a stereo system so that we could both enjoy music while sitting on the sofa during his visits. So he brought a bunch of old devices including two floor-standing speakers he had probably scavenged from the flea market – pretty shabby looking stuff that in fact sounded terrible. But even though this system didn’t sound good its output was big and I saw some potential to experience music in another ways. And that’s how my journey in the world of high fidelity started – trying to improve this initial set of junk components.

The system went through several iterations of refinement each starting with its final link – the speakers – moving upwards through the amplifier to the source. With each iteration the performance was getting better and I was forming criteria for good reproduction based upon my expectations for natural and vivid tone colors combined with realistic soundstage – something that turned out to be not so simple to achieve. Apart from different analog and digital sources and few transistor amplifiers I tried several mainstream reflex box speakers and they all seemed to add some colorations to the sound, not to mention their inability to render proper soundstage.

It was in a specialized speaker shop in Hamburg when I first encountered the magic of the single-driver back-loaded horn speakers. Although they were using the smallest 3″ full-range driver Fostex FE83, they sounded way bigger than their physical dimensions suggested and their ability to throw believable three-dimensional soundstage was simply astonishing. I realized that what was presented on the covers of the mainstream HiFi magazines was just the shiny side of the industry and that an alternative exists, based upon technological achievements of the past. From obscure sources in internet I learned about the golden age of audio reproduction, when bespoke systems evolving around high-efficiency speakers partnered with low-powered triode amplification were setting standards for fidelity.

As my system advanced further with the acquirement of full-range horn speakers and tube amplifier, I decided to spare no expense on front-end, for the source where the signal is born should be crystal clear in order to avoid complications later. That’s how the largest amount of my budget went for digital processor (AMR DP-777) which combined with the streamer (SoTM sMS-200) yielded rather satisfying results. In its current state a main virtue of my system is its ability to convey the feeling of liveliness a record bears, the soundstage is transparent and detailed, the instruments have body and weight and are easy to locate in the space.

With the elevation of the system’s performance I developed strong interest in the so called timbral listening and realized that devoid from the musical content the timbres of the instruments have their own aesthetic values and the tone itself is a separate source of pleasure. The interest in the timbral listening shifted my record preferences toward natural recordings – such that are made in natural space by avoiding any artificial manipulation of the signal. I found out that the sheer tonal beauty and timbral richness of the sound that acoustic instruments emit in a natural environment could not be matched in a studio and it is the right amount of direct and reflected waves that makes the instrument sound real.

The only caveat I see now is the certain degree of listening fatigue I can discern after prolonged listening sessions. Part of the problem might be that being crossover-less my speakers have slightly more pronounced midrange than usual, but I suspect that it is the amplification that stays behind the unpleasant listening fatigue thing. Apart from the quality of the parts, the circuit is what forms the greatest part of the amplifier’s performance. It has been proven that class AB push-pull designs combined with negative feedback tend to increase the number of odd upper harmonics present in the signal, which are known to harm the long term listening satisfaction. So my plan is to try some class A single-ended amplifier which might be better partner to my speakers and eventually transform the system into a dream machine. 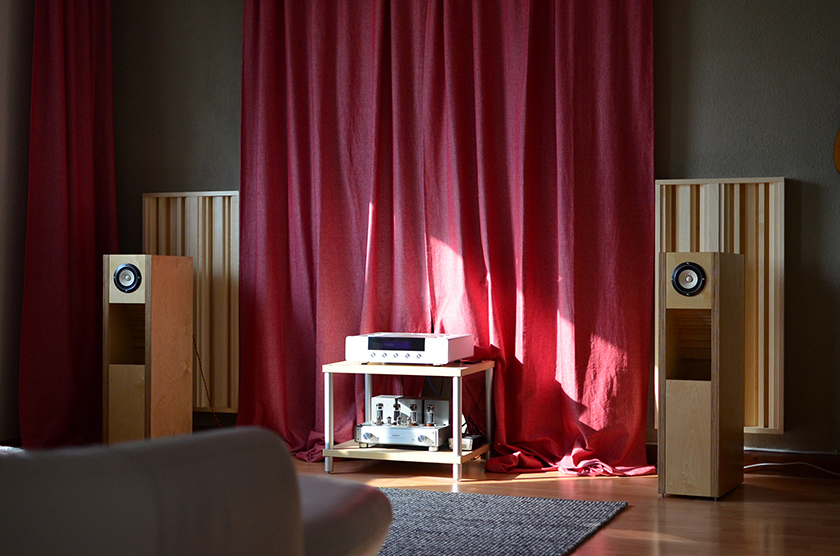 On the consumer side my attitudes toward listening differ from those established in the contemporary entertainment context. The listening room is not just an acoustic friendly environment – it is a temple that opens doors to musical heaven. The audio components are not just means to get to the core of the music but I believe they have soul, some remains of the designer’s spirit. Listening to music is a sacral act that brings joy and peace to my worn soul, it is always intent and resembles meditation. I prefer silence as a background and I never use music for that purpose. Keeping my ears clear for the most of the time makes appreciation of the music even more profound and I amuse myself every time when a record has been brought to life in my humble shrine.

One thought on “My audiophile journey”