I have to confess I was growing impatient lately, counting the days left until the opening of the main audio event in northern Germany – Norddeutsche HiFi-Tage. The fact that the city I live in hosts the second biggest audio show in Germany makes me feel lucky, because it is great opportunity, that costs basically nothing, to align one’s expectations and internal reference to what is considered top-notch in terms of audio reproduction nowadays.

It is my second visit to this key industry event, and I have to admit I enjoyed it even more than the last time. As usual it was hosted in Holiday Inn hotel in Hamburg, not far from the city center, and comprised more than 170 exhibitors distributed on 8 floors. What impressed me instantly when I first popped-in on Saturday was that it was pretty crowded and it was really hard to carve my way through the stuffed corridors. The next day though, on Sunday, especially in the afternoon the mass of people spilled over the hotel’s floors was already receding and it was relatively easy to find a way and navigate through the exhibition space.

There are basically two types of visitors, I can tell – those that are trying to judge reproduction qualities by listening attentively and those that were simply lingering from room to room enjoying the looks and the way different systems were approaching the music. I could hardly imagine what it is to visit such a show without being infected by the audiophile bug or knowing nothing about the function of the components stacked on the rack. Some time ago I had similar experience though, when occasionally visited the Essen Motor Show where some beautifully restored classic cars were on display. The lack of knowledge and technical understanding regarding the exhibited vehicles did not prevent me anyhow to enjoy their beautiful chassis, comfortable interiors and love for detail. I assume that with fresh, “unspoiled” ears one still can enjoy the show.

I tried to watch with the eyes of a layman, knowing nothing about technical concepts and standards of fidelity, trying to figure out what is it about this technological wonder that captures the minds and the hearts of so many wanderers here. I was absorbing the energies filling the rooms and the corridors of the hotel, trying not to think and analyse but simply to enjoy the ways the music was presented. At the end the purpose of all the equipment being on display is all about having pleasure and enjoying art. However hard I tried to stay aside from preconceptions and reasoning I couldn’t have spared a nod when some traits of the reproduction were opening ways into music.

Sure, everything contributes to the sound of an exhibition room – from the equipment rack, power conditioning and cabling through source and amplification to speakers and room – but I do believe that what affect the character of the sound the most are the speakers – these transducers of electrical signals into acoustic energy. That’s why my attention during auditioning of a system is drawn toward them, because what I hear is actually embossed by the speakers’ construction and materials, and in most of the cases by the complex interaction between electro-mechanical driver and enclosure.

Taking the speakers as a starting point I can discern two basic types of sound in the many rooms. One is associated with the modern HiFi criteria, characterizing with enormous slam, deep and very well controlled bass extension, great articulation of weight and scale. It evolves around well damped and rigid speaker enclosures comprising multiple drivers made out of modern, stiff materials, that are also low efficient and usually require hundreds of watts of amplification. On the other side of the spectrum is the sound associated with some more traditional values rooted deeply in the past, characterized with great articulation of low-level details, natural tone colors and the ability to produce satisfying listening experience even at very low levels. It evolves around lively, slightly resonant speaker enclosures with less damping, and highly efficient drivers with cones usually made of paper, which require few watts to sing.

Sure, such kind of classification is very simplified and consider just a limited number of reproduction qualities and technological aspects but it serves for orientation between the enumerable concepts and solutions available. An entire range of speaker technologies spans between the aforementioned extremes of conceptual sound. Except of the usual suspects – ported box and horn speakers – there are open baffle, electrostatic, ribbon, etc, as well as combinations between them – each offering its own characteristic flavor. During this year’s show I enjoyed representatives from both schools of thought and some that sit in between.

As every year there are basically two types of exhibiting technology as well. Some of the exhibitors take the listening act in their rooms more seriously, associating it with a real concert experience, thus restricting the room access once the demonstration has been started. The entrance is scheduled and the time divided into 30 min sessions with intermissions of about 15 mins. Usually bigger spaces that host well established and expensive brands are proceeding this way, while the most of the other rooms are constantly available for visitors. Some of the largest rooms were also hosting workshops, like demonstrations of different tubes in identical amplifiers, test of music files in different digital formats, comparisons between same program material in digital and analog formats and so on.

I started my journey on Sunday by visiting a demonstration comparing three different turntables from Avid equipped with the same tonearm/cartridge system in order to assess the role of the chassis. The demonstration was conducted by Matthias Böde from Stereo magazine assisted by the Avid’s founder and designer Conrad Mas, and became one of my personal highlights of the show. The audio system consisting entirely of Avid components and fed by program material pressed on 45 rpm LP was performing with enormous sense of scale and true visceral presence. Starting with the basic Diva II SP (4200 Eur) through the mid-priced Volvere SP (6300 Eur) up to the ultimate Acutus SP (15000 Eur) featuring unique variable frequency suspension system I had the opportunity to observe the subtle changes in detail articulation, naturalness, bass definition and soundstage caused by the different engines. These differences weren’t night and day but they were sufficient to justify more than 3 times difference in price. My impression is that already the basic Diva II SP is a killer in terms of price/quality ratio, delivering steady and natural flow of musical information to the rest of the system.

Towards the end of the demo an elderly guy asked why he can’t hear the differences he was supposed to. Another elderly guy answered that he probably has problem with hearing and it is a good idea to make an appointment with the Ohrenarzt (ear specialist). Trying not to be offensive Conrad Mas took the word saying that the guy actually has no problem with hearing, but with the brain. I was afraid that the situation threats to escalate and become slightly insulting, but Mas managed to explain his theory without further complications. He claimed that our human brains adjust to what we are accustomed to, and gave an example with 20 euro bottle of wine being substituted with another that costs 10 times more, and the tendency for someone who has no previous experience with more expensive, high-quality wines to render both the same or even to favor the cheaper. May be there is something, I don’t know, probably one needs some time to adjust to a level of quality in order to grasp its entire complexity and appreciate it. Anyway, it was funny and very nice listening experience.

I was caught by surprise in Silberstatic’s room – the well known German manufacturer of electrostatic speakers with roots into the local DIY HiFi scene – where instead of the expected electrostats a brand new 2-way compact loudspeakers were shown. This is the first product in Silberstatic’s portfolio made out of direct radiators and conventional enclosure, and I have to confess I was blown away by its powerful, transparent and articulate sound. Looking somehow similar to Visaton’s  Stella Light but having shorter cabinets these are rather misleadingly looking speakers. Their physical dimensions simply does not prepare you for the shock caused by the considerable punch, the vast soundstage and the well behaved and deep lows they are capable to deliver. Finish resembles raw granite but the enclosure is actually made of wood. The price for the pair will be around 2000 euro. I think these are still prototypes, not having entered production, but I guess such compact speakers have bright future and could easily take worthy place among their bigger electrostatic brothers.

The best of the show

My personal favorite this year was EAR Yoshino’s room showing a system based upon EAR electronics paired with speakers from Living Voice. Last year the EAR’s system was complemented with Graham Audio LS5/9 loudspeakers and I liked it a lot, but this year the match was simply outstanding. I would say this system takes place somewhere between the two extremes of conceptual sound I described at the beginning. The enclosures of Living Voice OBX-RW are relatively live and slightly resonant, being made out of chipboard with little damping, which contributes for the lively but in the same time natural and free of boxy colorations sound that by its degree of transparency approaches that of electrostatic speakers. The guy conducting the demonstration mentioned that Living Voice’s owner and designer Kevin Scott spends considerable amounts of time and effort trying to address the smallest details like the contribution of the veneer to the sound of his speakers; the material of the veneer, its thickness and grain, as well as the glue being used have been continuously put under scrutiny, and in my opinion the results of that extreme attention to the detail could be heard.

At some point a couple entered the room taking seats next to me, and after some time the woman asked what is in the boxes beside the speakers. I like to talk and explained that these are external crossovers – compartments hosting electrical parts connected in circuit for splitting and distributing the audio signal to the speaker’s drivers. She was obviously not aware that such things exist, not to mention the comprehension of the merits an external crossover has over the conventional one, integrated inside the speaker cabinet, or the importance of its topology. But I indulged in thinking that in her blessed virginity, unspoiled by knowledge and experience, she was enjoying the music probably even more. Now when I write this I doubt it, because it might be that apprehension of audio reproduction require some cultivation, the same way the aesthetic judgement is gradually cultivated or the good taste for wine, about which Conrad Mas was speaking, require some development. 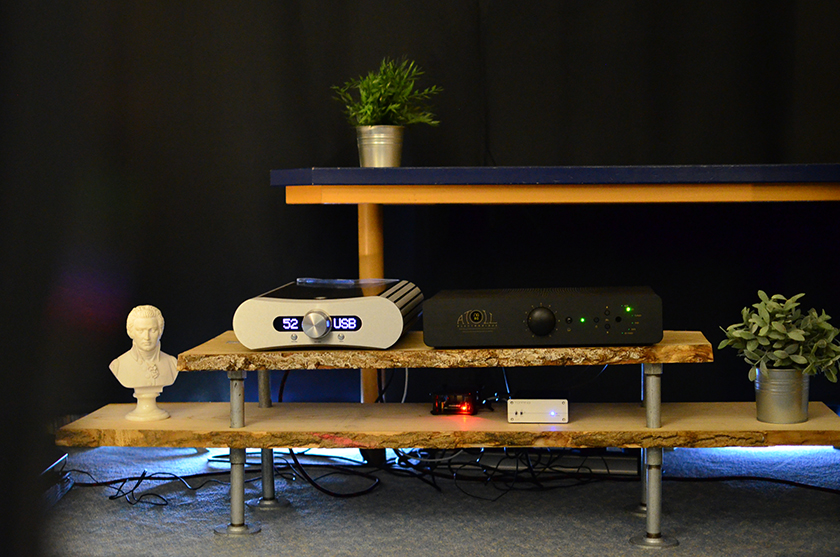 At the end I would like to say that the show was very well organised, it was vibrant and well attended. In contrast with the cold and rainy February weather, the cosy atmosphere in some of the rooms was inviting the visitors either to listen critically or simply to enjoy reproduction of music. The bitter part was the realization that two days are simply not enough for a visitor to experience all the variety of concepts and products. I inevitably missed some interesting bits, but that’s how life is. 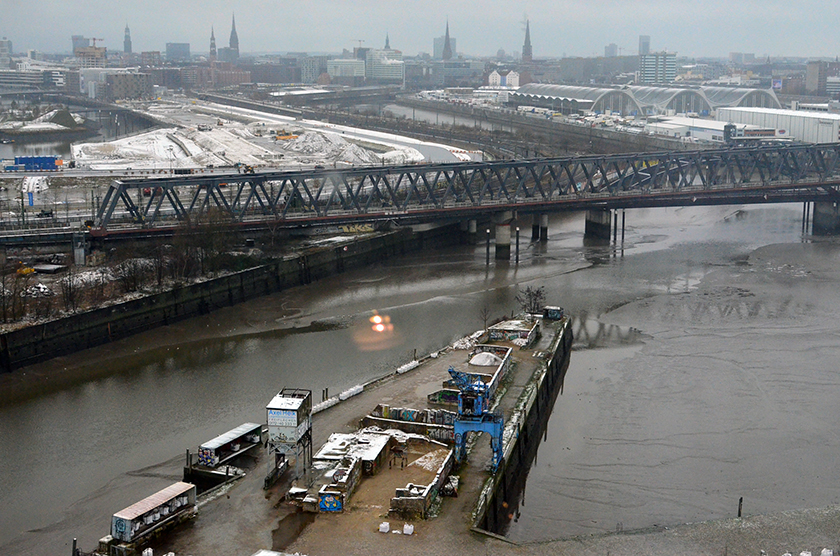