Today I would like to talk about the backbone of my system – the rack, this sacred place where all the electronic components are placed. Some of you might ask what is the difference between a regular lowboard one can obtain in every furniture shop and a HiFi rack made especially for audio applications. In order to comprehend the difference one should first realise what a tremendous impact vibrations have on audio reproduction.

Once the sound waves propagate in the room every surface they bounce into starts shaking. These small back and forth movements in the range of several dozens microns when applied to the electronic components, an audio system consists of, are the reason for inducing the so called mechanical noise, as opposed to the electrical noise caused by the presence of high frequency harmonics in the mains power. Both mechanical and electrical noise are the main enemies of high fidelity and trying to minimise their negative impact is one of the main occupations of an audio aficionado. Floor vibrations propagate through the legs of the rack to its shelves shaken additionally by their direct impact with the moving air, thus transmitting the vibrations to the accommodated components. Except to provide space for stacking components efficiently, one of the main purpose of an audio grade rack is to cut off or at least minimize the vibrations so that they can not affect the performance of the components it accommodates.

Back in the days all electronic components of my audio system were hosted on an old TV board made out of particle board which I additionally tried to decouple from the floor by mounting spikes, but the result was rather disappointing.

In fact this old peace of furniture was shaking as a leaf on autumn wind and as a result smearing details, midrange fizzle and lack of definition were making the presentation non-believable and artificial. One just have a feeling that something is not right.

In the course of time I learned that whenever I have the feeling that something is not right it is actually not right, so I have to find a solution. I presumed that the solution might be in adopting a dedicated HiFi rack and I immediately started researching the market. There was plenty of choice on the market – local and foreign companies were providing different solutions for eliminating or at least minimizing the noise induced by vibrations.

Somehow my attention was drawn toward the products of the local German company called Creaktiv, which has some quarter century history in producing audio equipment racks behind its back.

I liked the sturdy look of their products based upon aluminium tube legs divided into 4 internal cameras filled in with sand to support shelves made out of melamine-coated particle board claimed to damp a good deal of air borne vibrations. Through holes in the shelve’s corners threaded rods connect them with the brass internal frame, hosted inside the legs, which is decoupled from the tubes themselves by means of rubber tampons. I decided to go for the base model called “Trend” for its moderate price (270 euro for 2 shelves version) and very promising price/quality ratio claimed by several reviewers and customers. I noticed also that quite a few respectable HiFi dealers here were using Creaktiv racks in their showrooms as well as on dedicated audio expos.  So I ordered it and in a few days I had it delivered.

After the assembly was done I started auditioning and it was obvious that the bass goes dipper and there were more nuances and detail in the audio presentation in comparison with the old piece of furniture. Than I started checking if it sounds better with or without spikes and at the end, however strange might sounds, I preferred it without spikes for it seemed to bring more solidity and weight to the sound. The thing is also that the room has laminate floor covering so I used to put protective disks underneath the spikes in order to protect it. Even high quality spikes such as SuperSpike from Soundcare which are used in professional audio applications didn’t manage to convince me and to my opinion the system performed better when the rack was staying directly on its heels.

I used it like this for months until one day driven by pure curiosity I decided to check how placing the streamer directly on the floor would affect the sound. Carrying out this experiment throw me in dismay – it all sounded better when the streamer (SoTM sMS-200) was placed down on the floor beside the rack. I could not believe my ears and decided to put all the components directly on the floor. Again the system sounded better, even though I checked several times by putting all the components on and off the rack, which is a hard labor and time consuming activity. At the end I was bitterly disappointed with the result of this experiment, which came to confirm the fact that the rack does not contribute nothing to the sound quality and though it provided efficiently organised space for placing components, soundwise it only worsens the situation.

I was contemplating the idea of selling the rack and try another one, but then again it occurs to me that I have to give it a last chance by trying once again the recommended setup with spikes. I have already sold the SuperSpikes and I didn’t have on disposal any spikes designed for use with M8 threads which is the size of the brass inserts constituting the internal frame of Creaktiv Trend. I also had the suspicion that the disks placed beneath the spikes to protect the floor actually were counterproductive and at the end I went to the hardware shop to check what was available there. I stumbled upon some grub screws which in spite of having conical ends were not as sharp as to punch through the flooring so I could have eventually used them without any protective disks.

I bought a quad of M8 grub screws and a cap nut necessary for screwing them. After tightening the screws moderately I have prepared for auditioning.  With the first few tones coming out of the speakers my jaw dropped. I had the feeling I listen to music for the first time – there was air and space between the instruments, bass went down as deep as I’ve never heard it before, characterized with weight, articulation and a new level of clarity. I was so happy that after misusing this rack for several months I have finally found the holly grail. 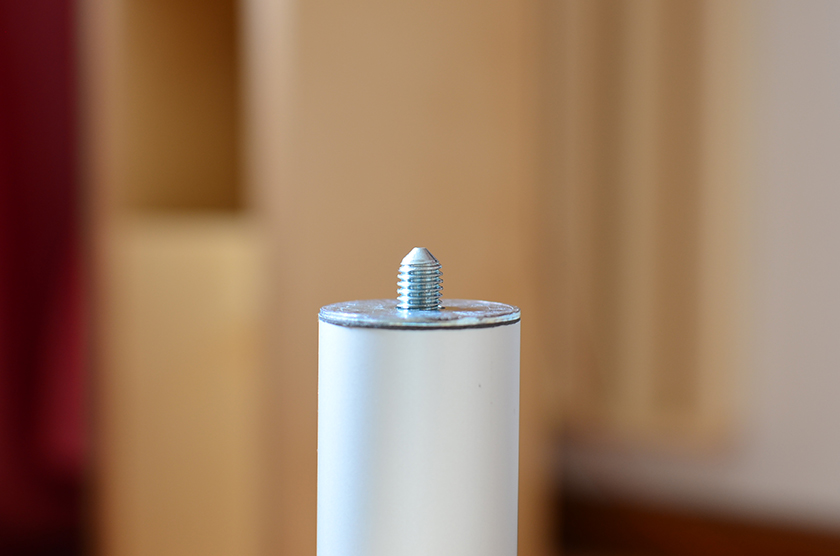 As an explanation of this phenomenon which has brought the sound to a completely new level of refinement I want to point out the fact that the grub screws were utilized as mediators between the floor and the rack’s internal rod structure. In my previous attempts with spikes I have made two mistakes that cost me a lot – first I used protective disks beneath them which without doubt are reducing the decoupling effects and second I screwed the spikes completely so that they were in contact not only with the internal framework through its threads but also to the bottom end cap of the legs. Without protective disks the only contact between the rack and the floor is going through the grub screws to the internally threaded brass rods constituting the rack’s skeleton, which is decoupled from the outer aluminium tubes by rubber tampons. 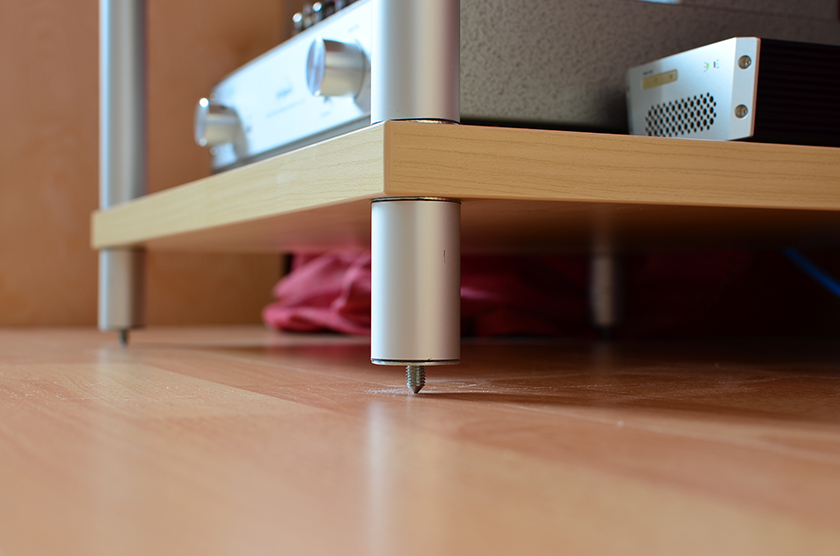 I think also that these internally threaded rods work like a sleeve anchors so that by screwing the rod the sleeve expands and couple itself tightly inside the aluminium tube. I came to this conclusion because when you start tightening the screws each revolt makes it harder to screw and one can feel that tighter you screw them the tighter they couple with the outer aluminium tubes.

I experimented further with applying different torque strength by means of torque adjustable wrench and noticed that the best results were yielded when the grub screws are loosely screwed. I found out that when the rack itself is tightly screwed and the grub screws loosely the sound gains clarity and definition of unprecedented character. 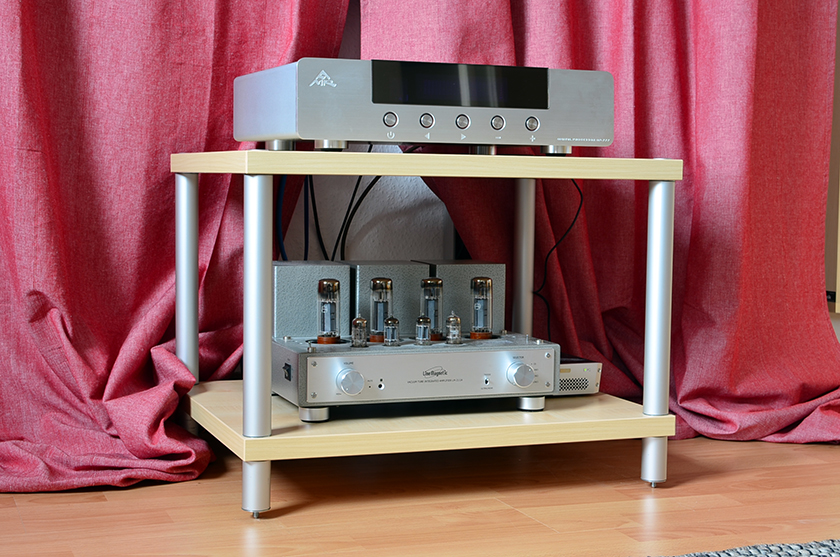 After these final adjustments I can say that this rack is frighteningly good and its effect in regard of mechanical noise cancellation is nothing but tremendous. Learned by this lesson I applied similar concept to decouple the speakers and yielded the same positive results. As a conclusion I can only say that Creaktiv Trend is a hell of a rack that worth every cent, but as usual a great deal of attention have to be put in its proper setup.